I now know why they say every stage with a baby is better than the last and you just want to freeze time.  This past month has been so precious.  Ritter came out of the sleep regression and the last wonder week right after my last post…and the last month has been easy breezy.  He got into a super good groove with his schedule, naps went back to normal, and he started all kinds of new tricks.  He is rolling over all the time now, grabbing stuff, looking at it, etc.  He is really “playing” now and it’s so much fun to interact with him.  He has favorite toys and favorite things he likes to do.  He isn’t very interested in sitting up yet… but he’s getting super strong.

We had Ritter’s first Christmas.  It was crazy busy and stressful but fun to spend quality time with family.  It was so different not having the focus really on us anymore.  This is the first year Eric and I didn’t go all out for each other …mostly because we didn’t have the time or money to go shopping. Ha.  But also because it’s all about Ritter these days! And that’s perfectly fine.

We have gone way beyond outgrowing this house…it’s just downright crowded and I’m about to go nuts.  We are house hunting and hope to put our house on the market this month.  Everyone say a big prayer that we find a house we love in a good school system!  We are so sad to be leaving the Forest Park/Avondale area.  This place is home in so many ways and we love our wonderful neighbors and vibrant community.  We just really want Ritter in public school.  We both feel really strongly about a public school education.  And if we can get in Homewood schools I don’t mind being “house poor” for a while

We will also welcome Ritter’s FIRST first cousin to the world this month.  My sister is due at the end of January and we are all anxiously anticipating the arrival of Allie.  Please send up prayers for a healthy delivery!

New Stuff…
Loves when you sing to him, especially Old McDonald, the ABC song, Twinkle Twinkle…The Stones, Josh Ritter, Jason Isbell, Counting Crows.  Okay, he just likes it when we sing, he doesn’t care what it is.  ha.

Puts EVERYTHING in his mouth.  Seriously!

Dropped a feeding and a nap!  Taking 4 6-7 ounce bottles a day plus 3.5 ounce dreamfeed.

Just started becoming afraid of strangers – but only men.  Will go to any woman.  But with men he needs to warm up first and then becomes their best friend – kinda like Jackson does!  ha

This week we are working on dropping the swaddle for naps so hopefully this will go away when he does away with the swaddle during the day.  Yesterday the first nap of the day was rough but the last 2 were pretty good.  We are using the ZipadeeZip for this transition.  It’s working well!  We are still using the sleep sack at night with arms out.

Stuff we love right now:
1)  These plastic links (rings) and these…  you can use them to attach toys to an activity center, car seat, stroller, or bouncy.  You can also just link several of them together.  He loves to shake them and make them rattle.  He loves to put them in his mouth.  We also use them to lower toys hanging from the musical gym to make them easier to reach and play with.  What I love about them is that you can clean and sanitize them easily.  We have them all over the house.  He loves them.

2) He loves to play with this stuffed doggie!

The Amazing Wonder Weeks:
Look guys…the Wonder Weeks are no joke.  I blogged about this last month but it deserves another mention.  It’s FREAKY how on point Ritter is with all this stuff.  Each of them have a set of signs that they are entering the next leap.  Ritter is usually so happy, sleeps well, eats well, etc.  Whenever something is off I usually go and consult the book and whatever is going on is usually listed as a sign of the next leap.  It’s crazy.  For him the first sign is usually a decrease in appetite.  He just simply loses all interest in eating.  Then he becomes more fussy.  And all of the stuff it says he can do when he comes out of the leap is right on point also.  This book has been SO helpful.  I’m able to understand what he’s trying to master and help him through it.  It also helps explain why things are off with him from time to time.

Recent photos and videos:
(excuse all the photos of me without makeup)

Getting super clingy and cuddly these days… 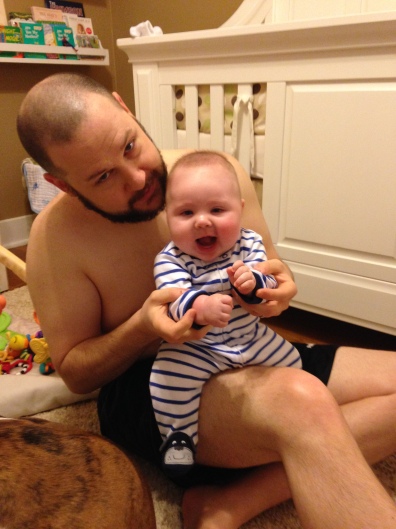 This is the BEST right here…

A couple of things I forgot to add… Ritter is becoming a lot more aware of his surroundings and has absolutely fallen in love with Jackson.  Every time Jackson comes near him he giggles and squeals.  If Jackson comes up to him and licks him he goes nuts.  It’s the cutest thing ever!!! The sad part is, Jackson could care less about Ritter.  All he wants to do is eat Ritter’s toys.  He knows better than to go after them so he just sits and stares at them intently for hours.  It’s hilarious.  He is especially obsessed with Ritter’s Sophie teether.  Jackson has just always thought that everything in the house that squeaked or rattled belonged to him and he doesn’t understand why he can’t play with theses things.  It doesn’t matter how many new toys we buy for Jackson, he wants to play with whatever Ritter has at the time.  It’s so sad.  He’s like a jealous little kid!!!

Another update…we got the go ahead to try veggies with Ritter.  I think I might wait a couple of weeks but he’s eating so much cereal and I would prefer for him to be filling up with solids that were a bit more nutritious.  So we will start with squash soon and see how he does!

Also, today was the first day we had to actually wake Ritter.  He usually wakes anywhere from 6 to 7.  Today I woke up at 7:45 and freaked out because I hadn’t heard from him.  It was our first 12 hour night.  I’m hoping we get a lot more of those soon! I guess I need to start setting an alarm on work days now!  I never set one anymore because he always wakes us up!

Last thing… we are pretty darn sure Ritter will be left handed like me!  Yay, finally something of mine!  haha.  He grabs things with his left hand and primarily pushes up to roll over only with his left arm.  So he only really rolls one way.  He can roll the other way but usually prefers rolling over his right shoulder.