Ritter actually turns 17 months today but I’ve just been so busy with work, being sick, and the holidays that I haven’t had a chance to update.  We were all 3 horribly sick around Thanksgiving and then we finally got over that and now we are sick again and Ritter has a double ear infection.  I’m going to go ahead and thank my lucky starts we don’t have the flu (yet) but it’s been a pretty rough couple of months for the Craigs.  Hard to tell if this is just from starting school and being exposed to all those new germs, or if it’s just a product of sick season – EVERYONE has been sick.

Language Stuff:
It seems like over the last few weeks Ritter has truly become a little boy.  He understands everything and he’s communicating so well.  He’s been regularly making 2 and 3 word sentences and the other day he actually made a 4 word sentence – “Daddy go bye bye.”  I’ve busted my butt to get as much as I can on video because he just amazes me with what he understands and says.  I can’t even keep up with all the words he knows now so I won’t do a list anymore…but here are some examples of things he’s saying …
– “momma read”
– “daddy put on” (a hat)
– “move jax” (telling Jackson to get out of his way)
– “mama go” or “daddy go” when we leave
– “jack food” (while handing me Jackson’s bowl – telling me it’s time to feed him.)
– “chick’n nug”  (this one was crazy…I was making his dinner and clear as day he said “chic’n nug” – I didn’t even know he knew what they were called – I got that one on video too!)
– “hey mama” or “hey dada”
– he’s obsessed with bottles and caps.  We constantly have to give him an empty water bottle to play with.  If he screws the cap on and can’t get it off he comes up and says “mama top off” – clear as day.  I couldn’t believe it the first time he did it.
– “mama tee tee”  (he says this when I go into the bathroom. ha)
– he started doing this new thing where he comes up and pulls your shirt up and points to your belly button and says “bewey butt” ..OMG it’s just the best thing ever.  He obviously can’t get out ‘belly button’ but it’s so clear what he’s saying.

He has stated naming things constantly.  He points to things and wants you to name them or he points and names them himself.  He has also started listing people …while driving down the road or eating dinner he starts naming all the people he knows.  It’s so sweet.  Usually it’s after we have seen them recently but sometimes it’s just out of the blue.  He will say “Cin Cin, Papa, Meme…” and the other night after Christmas at my mom’s he was naming people he had JUST met and I didn’t even realize he could remember their names so fast.

He also makes crazy associations that I don’t know how he knows.  For example…we’ve been reading a book about Frosty the Snowman.  Then this morning he walks up to a snowman ornament on the tree, pointed, and said “Frossy.”  Also..he knows what a dog looks like obviously and can say “dog,” but the other day he came up to me and pointed to the Victoria’s Secret PINK logo on my sweatshirt (which is the outline of a dog) and said “Dog!”  So he knows that real dogs, cartoon dogs, stuffed dogs, and apparently the outline of a dog are all “dog!”  How does he know that!?!!?

He’s also gotten great at naming the different body parts.  He knows hair, ear, belly button, mouth, toe, and tongue.  And he will stick out his tongue if you ask him to!  We got him a Mr. Potato Head for Christmas and he’s able to name all the parts on him also!

Potty:
Since he was little I would say “mama has to go tee tee” when I went into the bathroom.  So obviously he understands that that’s where we go tee tee.  But I didn’t know he also understood what “tee tee” meant or that he knew when HE was going tee tee.  But recently during bath time he has stated to look down at his penis and say “tee tee” right before he goes.  I hate when he goes in the tub, but I got so excited because he clearly understands what “tee tee” means now and he seems to be able to anticipate when he is going to go!!!  I’m hoping this means he is going to be easy to potty train! We might start sooner than we anticipated.

Motor skills:
Well the wobbly walking is about over.  He’s pretty much a pro nowadays.  He is going so fast at times he almost breaks into a run.  We had a few weeks of constant trips and falls but he’s been much more stable the last couple of weeks.  Thank god because I honestly thought he was going to end up with a concussion because he was falling so much.  He also FINALLY learned how to stand from sitting.  You would think he would’ve gotten this down before walking but no.  Up until just this past week if he was sitting on the floor he would crawl over the a piece of furniture and pull up to stand, rather than just standing up where he was.  He has finally figured out how to stand from sitting.

Fine motor skills continue to advance.  He’s been obsessed with bottles and tops for a while but he finally just figured out how to screw them on to tighten them.  So instead of just sitting the top on the top of the bottle, he actually turns it back and forth now.  He doesn’t quite get which way is tight and which way is loose, but he turns one way or another until he can’t lift it off of the bottle.  Crazy to see him figure this out!

School:
As with everything with Ritter, I stress and worry about every little change and he handles it like a complete rock star.  He started school on Nov 10th and by the 3rd day wasn’t even crying.  He fussed off and on for the first 2 days and then was happy as a clam.  He also napped perfectly on the cot from day 1.  2 hours without a peep.  I was so proud of him.  As the weeks have gone by he’s adjusted more and more.  For the first couple of weeks he would still fuss when we dropped him off but now that he’s learned all of the staff members and feels comfortable with them, he happily goes to any of them each morning.  Additionally, school has made him so comfortable around strangers now.  He used to cry or act fearful of new people but now he smiles, giggles, and engages with new people from the start.  I can’t even explain how positive the whole experience has been for us.

Wonder Week:
Ritter entered the final wonder week around the first week of December.  We have about another week and a half left of it.  This one has been different form the others as he is more of a kid now than a baby.  Like with the others his appetite definitely decreased, especially his liquid intake.  He went from drinking about 15 ounces a day of milk plus 2 cups of water to drinking only about 5 ounces of milk a day.  Crazy the difference.  He was also fussier than normal but he could be easily distracted thank goodness.  His sleep wasn’t disputed (nothing disrupts this kid’s sleep) but he did start waking up from his nap super upset.  It has been so weird.  He would go down just like normal.  He would wake up happy but when we got him out of the crib and got him changed he would completely lose it and wouldn’t recover for a good 10-15 minutes.  Then just all of a sudden he was completely fine, giggling, etc.  SO weird.

I also think I’m seeing the beginning of tantrums.  It’s like he gets upset for no reason (or a reason he doesn’t understand) and he has to get all these upset feelings out.  He lays down and just cries.  Nothing will calm him down.  He does it for a few minutes and then just gets up and is okay.  I try not to reinforce them so I just sit quietly until he’s done or leave the room if I can.  He seems to get over them faster if I’m not in the room.  I know all toddlers have them…I just hope his are mild.  ha.

I’ve also noticed he is talking more.  He’s always been very verbal but he’s using sentences more and babbling in non-coherent sentences and baby-talk too.  It’s like he’s trying to have conversations.  He makes little expressions when he’s jabbering.  It’s so cute.  He’s also mimicking us a ton.  He’s now at the stage where I can say “can you say ____?”  And he will say it, or try to.  I’ve been so surprised at how fast new words stick, even if we don’t practice them alot. 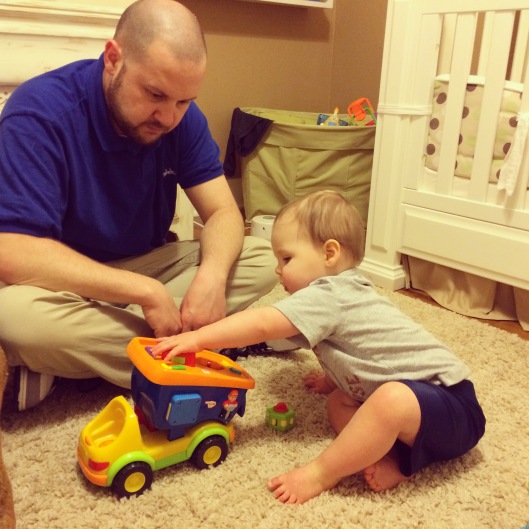 I love dressing him for school in little cords and khakis! 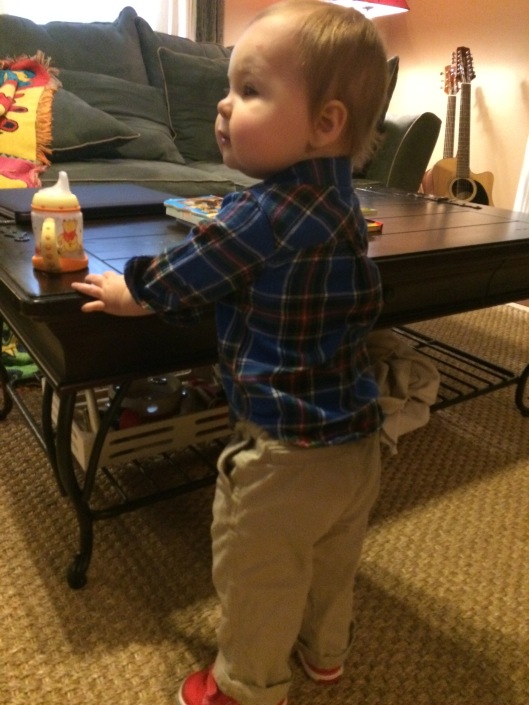 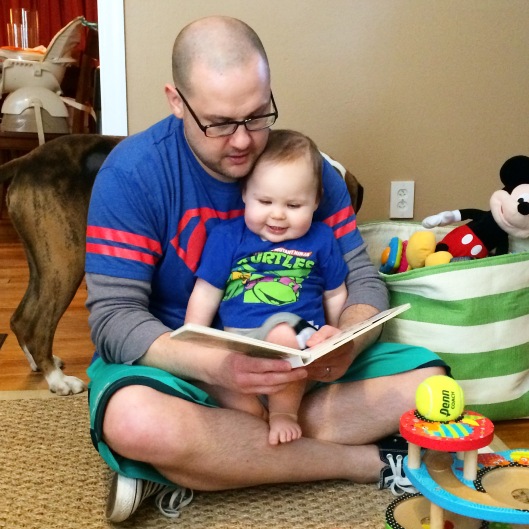 His teacher sent me this from school. Such a happy boy!

Right after he got home from his first day at school! All smiles! 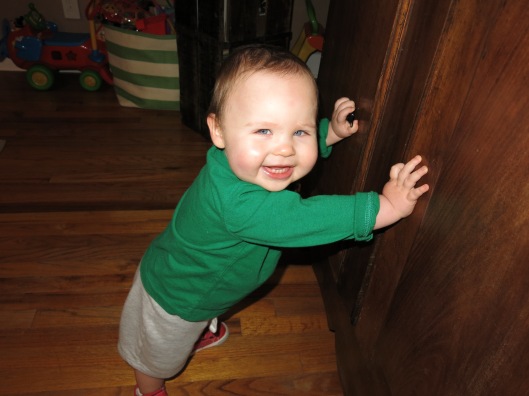 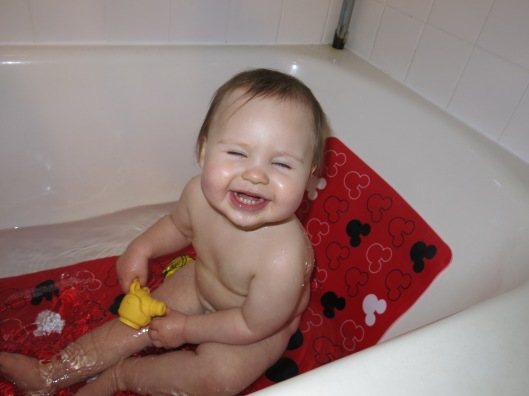 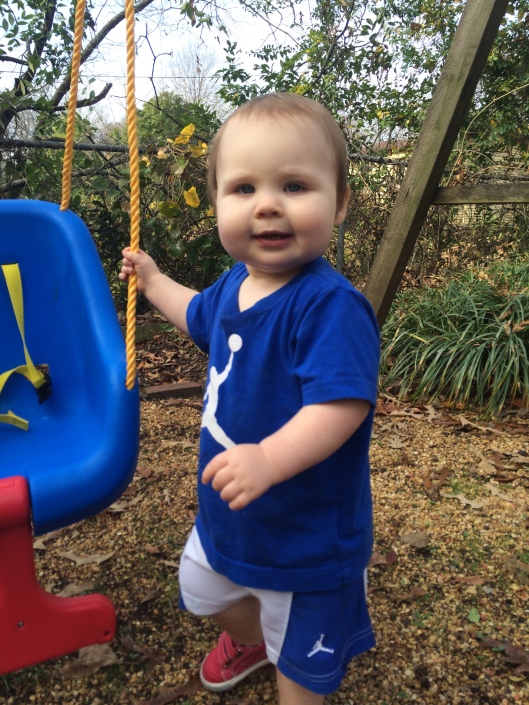 swinging outside on an unseasonably warm day! 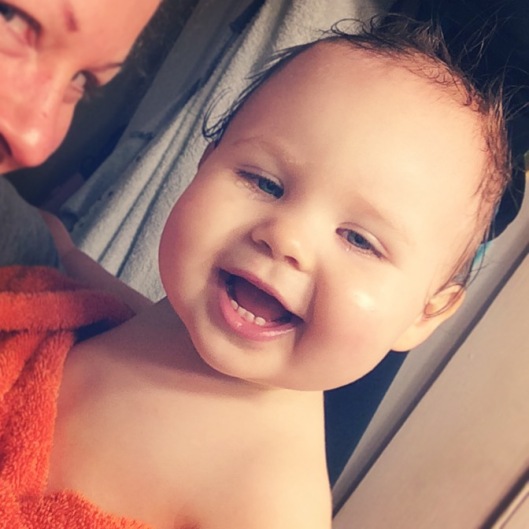 he loves school so much he tries to pick up his backpack when we are taking too long to leave in the mornings!

Putting money in his “Key bank” (Mickey is “Key”)

sliding at the park. 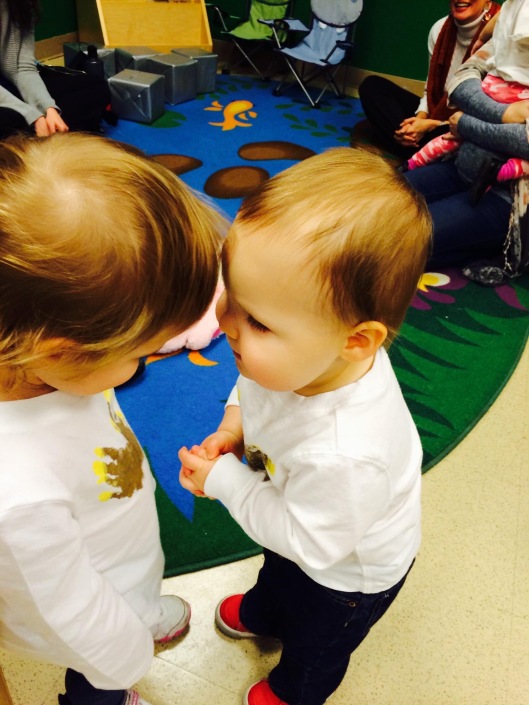 giving kisses to a classmate at school! He loves to give kisses! 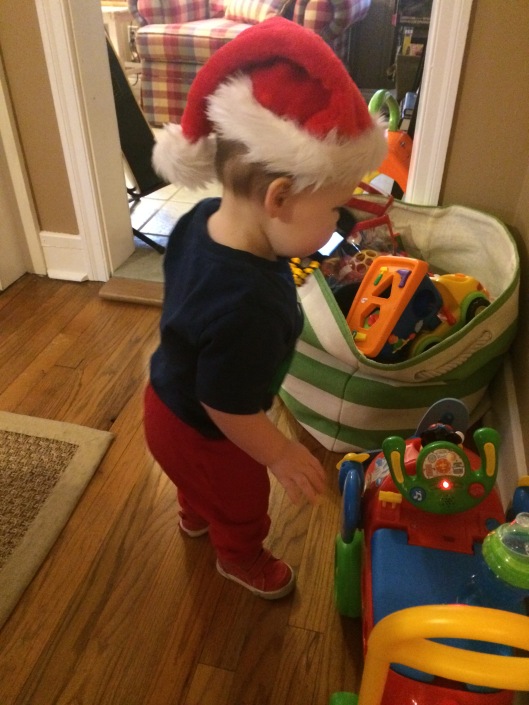 Getting into the holiday spirit!

At the doctor with this nasty holiday crud everyone has 😦 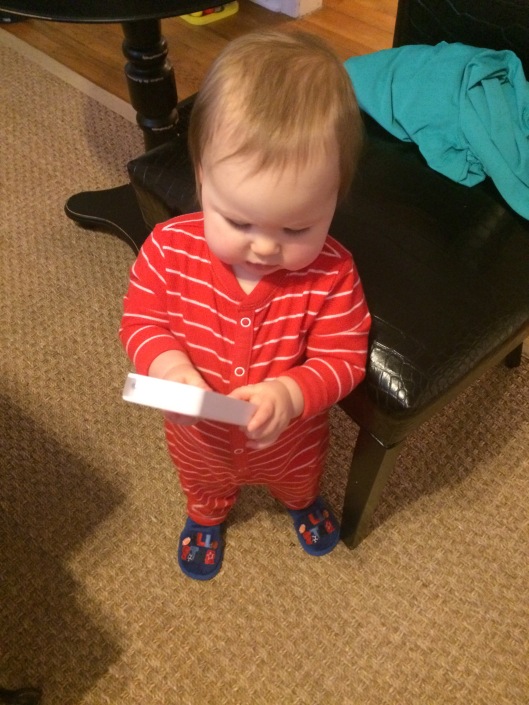 Loving all the packages!

Christmas morning family pic. Me and R have matching PJs! 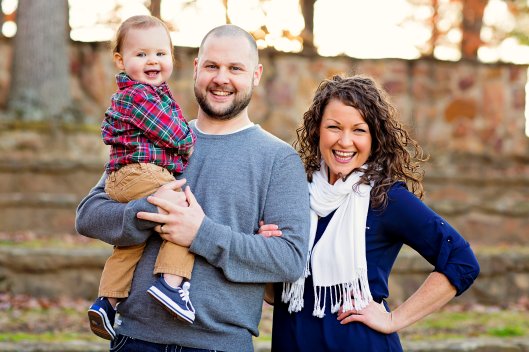 Here’s the chicken nugget video…
He’s like “why do you keep asking me?  Just give it to me already!”