I didn’t think I would feel the need to post Ritter updates as often after he turned one but, honestly, he’s changing so fast these days I feel like I need to document it all.  He will be 14 months old tomorrow.  It’s CRAZY how much he’s changed over the last 2 months. So here’s a quick update of all the things that come to mind… I think the biggest thing I’ve noticed is just his language and comprehension development.  He follows pretty complex instructions like “give mickey some water” – he then will go find his sippy cup and hold it up to his Mickey doll’s mouth.  If you say “Ritter, go find your hat” he will look around until he finds a hat and bring it to you.  He’s doing lots of cool little things like that.  He also understands “let’s check your diaper” to which he starts fussing because he’s at the age where he absolutely hates diaper changes.  We have to use lots of diaper changing distraction techniques.

He’s saying alot of new things too.  He’s learned the word “shoe” and when he says it I just melt.  I hold up my shoes all the time and ask him what it is just to hear him say it!  He’s also saying “bye” and finally sorta waving.  Other words he is saying are cup, eat, read, phone, keys, book, ball, hi, hey, tree, dada, and mama.  He’s also saying “choo choo” when you show him his toy train.  I’m assuming Taylor or Brenda taught him that one because I pulled it out of the diaper bag today and he said “choo choo” clear as day.  I think he’s also saying ‘Meme’ and ‘Tay’  for my mother-in-law  and our nanny Taylor.  He tries to say “hello” when playing with the phone but it comes out like “eh-oh.”  He can also count “one..two..three.”  He did it over and over for a few days and now he’s bored with it.  I’ve noticed that he will learn something new and say it ALL the time and then just stop.  It makes me crazy…especially when we are out and about and I want him to say a word on command and he won’t!

He’s also mimicking us alot.  He will watch me do something and then try to do it himself.  He watches me take diapers out of the drawer of the changing table and put them in the diaper caddy so he tries to do this too.  He will try to put on his own clothes and shoes also. And when you say “it’s bath time” he starts rubbing his hands on his belly like he’s washing himself. His new trick is getting you to play chase.  He loves to crawl away from you real fast and giggle as you chase after him.  He does this with Jackson too. As always his favorite activity seems to be organizing things.  We have this little diaper caddy organizer thing that hangs on his changing table.  He likes to take everything out of the pockets and put them back.  Same for the cabinets.  Instead of sitting down and playing with toys he likes to move them from place to place.  He likes to put them on the coffee table and take them off, over and over.  Maybe it’s because he watches me clean up and organize all the time!  He also loves to play in the diaper bag…pulling everything out and putting it back.  We recently started KinderMusic and in each class the teacher brings out a box of instruments.  Everyone gets an instrument and takes it back to their spot to play.  Not Ritter…he stands at the box and pulls all the instruments out and puts them back.  He also loves things with lids.  He loves taking the lid off and on.  He also loves things that open and close.  He doesn’t say “open” but when he closes it he says “close.”

Ritter dropped his morning nap at 1 year and 30 days old (8/27/14).  We thought this would be a gradual process but realized that, as with every other change with him, cold turkey is best.  We had about 2 or 3 days of some fussiness in the morning but then he adjusted just fine.  He’s now napping for about 2-2.5 hours at 1pm.  He’s still going to bed around 8:15 but with the 1 nap transition he’s started sleeping even later. I have to wake him up most days around 8.  And he’ll sleep even later than that on the weekends.  🙂 Mommy loves her sleeper.  He has a new game he likes to play where he doesn’t like to get up when you come to wake him in the mornings.  He crawls away as fast as he can and buries his head in the corner of the crib and giggles.  If you go over and try to pick him up and scurries away to the other side of the crib and does the same thing.  It is SOOOO cute!!!!  So I usually play this with him for a few minutes before I get him up.  He thinks it’s hilarious!

Ritter still isn’t walking on his own but he’s a pro at walking holding onto something.  He walks all around the coffee table, along the couch, etc holding on with just 1 hand. And he’s FAST.  He will also now walk holding my hand which is so awesome.  But he’s not ready to take the leap on his own yet.  I’ve caught him standing and balancing by himself without holding on to anything a couple of times, but no steps yet.  Like everything else…he will do it when he’s ready.  I just hope he’s walking when he starts school on Nov 1st.  I will also be glad for his poor little knees to have a break.  They stay bruised up. Ritter still eats like a rock star.  His diets is mostly veggies.  Beans and nut butter for protein.  Avocado and olive oil for healthy fats.  Non dairy milk.  We do some fish and chicken but very little.  Mostly organic produce.  When he’s teething he is fussier during meal times and has less of an appetite…but otherwise he’s still eating very well. I’ve noticed that he is having a bit of stranger danger recently.  He’s always needed to warm up to new situations but after 15 minutes or so he was usually good.  However, I recently took him to the childcare room at my gym while I worked out and he pretty much cried the whole time.  However…like most things, he adjusts very fast so I think if I keep taking him on a regular basis he will warm up to it.  For example…we recently started the KinderMusic classes.  When we walked in the first class he freaked out…new place, lots of new people, a big crowd, etc.  He cried and fussed off and on for the first 15 minutes.  But after that he was crawling all over the room and saying “hi” to everyone!  We went back for our 2nd class today and he never fussed once.  Didn’t even wrinkle his brow.  He loved every second of it and even ended up in the middle of the circle dancing for everyone!  He made a friend and even shared his snack with her!!!  So…I think the first class was an adjustment because it was something new, but today he was totally fine!  I was so relieved.  It makes me feel alot better about him starting school in a month.  The first day or 2 might be rough but, like with everything else, I totally expect him to adjust quickly and be the happy boy he usually is!

Loves the dump trucks at the park! 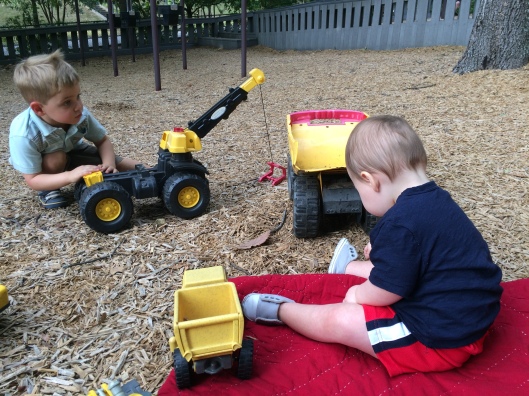 He even made a friend who wanted to understand why he couldn’t walk yet!

And loves trips to Publix!

Train ride at the zoo!

Filling the truck up with mulch! 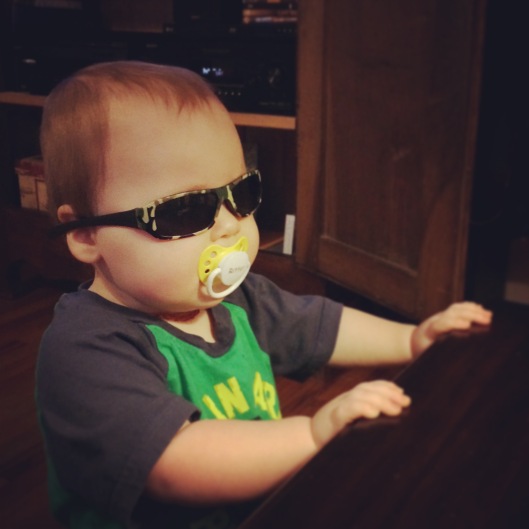 Cute new trick…he leans back on his hands, kicks his legs, and giggles hysterically! 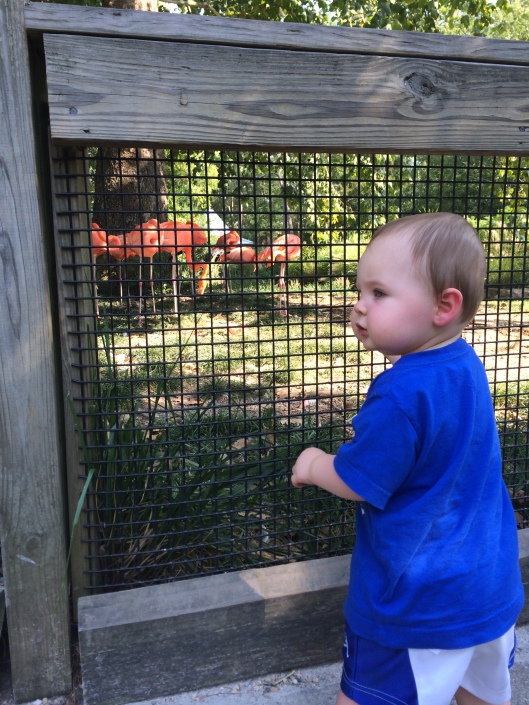 He loved the flamingos at the zoo!

Spending a beautiful evening outside with mommy and Jackson… 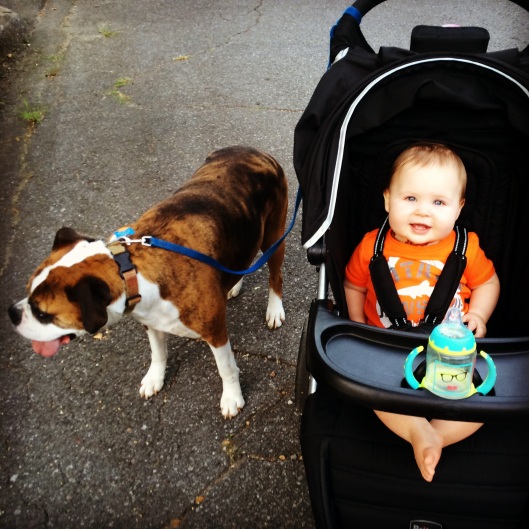 Still loves long walks with Jackson! Lately we’ve been playing music on our walks too! 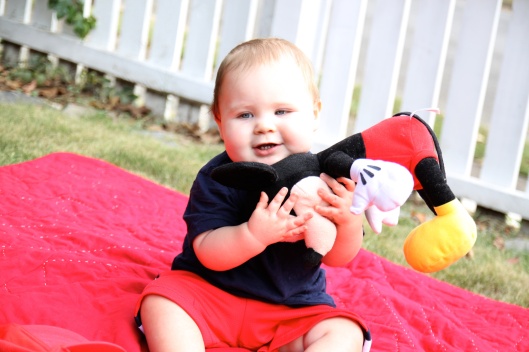 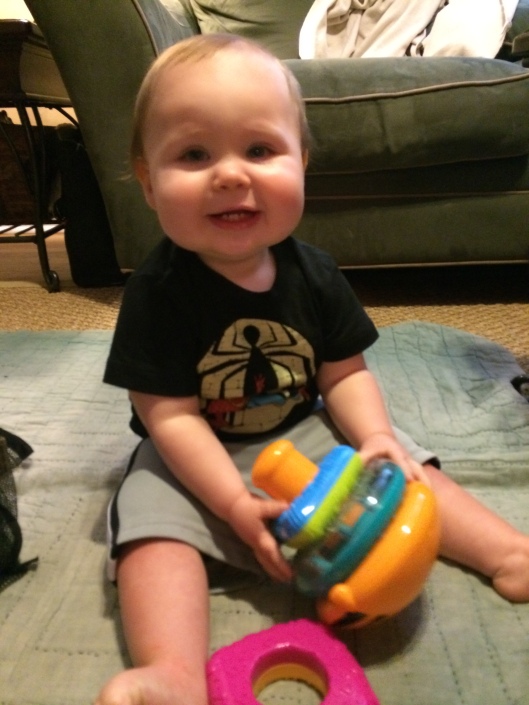 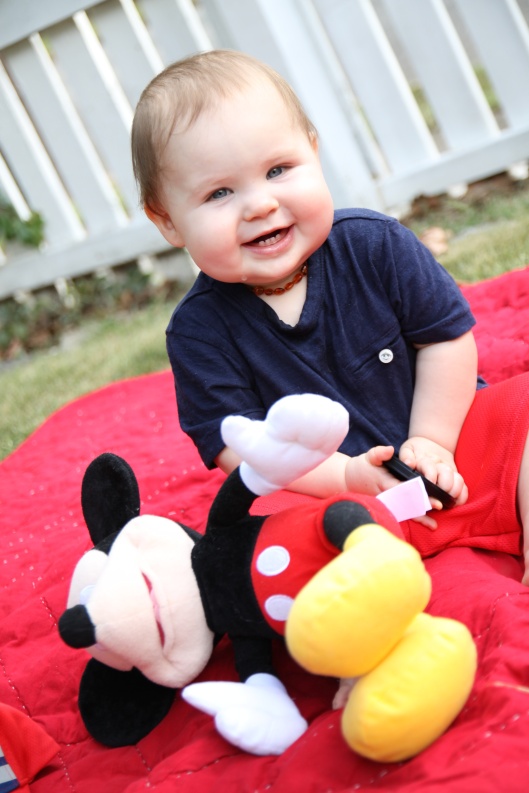 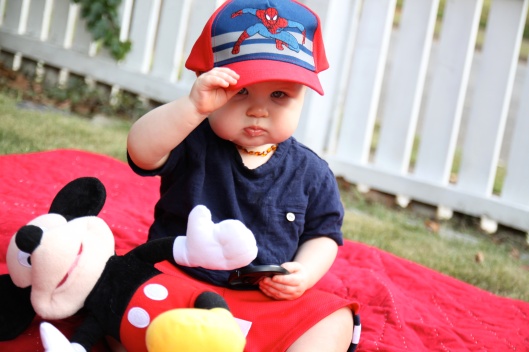 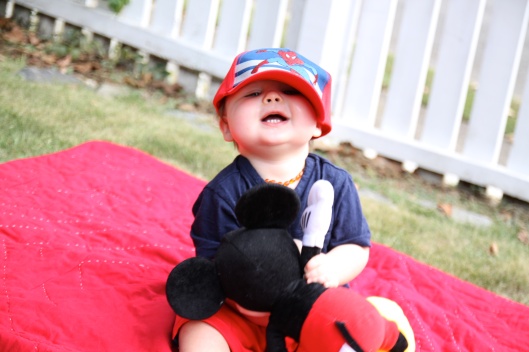