I knew life would change when I had a baby.  I knew this…cognitively.  But nothing prepared my heart for it.  It feels like it is going to burst open on a daily basis.  It is so full of gratitude and love…so full that I almost can’t stand it.  I also wasn’t prepared for the fear.  The constant fear of something happening to him.  Oh the ways my brain races about all the things that could go wrong!  I try really hard not to think about it, but being solely responsible for a life is scary.  I keep saying to myself …”I’m someone’s parent!”  That’s heavy!

Ritter is doing beautifully.  He eats like a champ and burps like a grown man!  He’s already taking 4 ounces at each feeding (every 3 hours).  He is on a combination of formula and breast milk.  Breastfeeding didn’t work out for me (I’ll skip the part about being an emotional basketcase over this) but I am so blessed to have amazing friends who are nursing their own babies who are donating milk to my sweet Ritter.  The pediatrician is also very happy about this because he will still be getting all the antibodies and immune boosting effects of breast milk.  This is such a gift to me, I can’t say enough how grateful I am for this.  I was blown away with how many offers I had from people willing to donate milk.  I pray that I will be able to successfully breastfeed baby number 2…but for now, I am accepting and grateful of this gift from sweet friends.

I am loving how much I learn about Ritter on a daily basis.  His little tendencies and mannerisms are really coming out.  He loves to be swaddled.  He doesn’t like tummy time very much.  You can’t let him get too hungry or watch out – blood curdling screams!  He adores his Wubbanub and holds onto it for dear life!  He has crazy legs.  Even when he’s asleep those legs are kicking nonstop.  When the kid was in the womb I said he would have RLS like me.  It’s hilarious!  He’s becoming much more alert and looking around alot.  He seems to fixate on lights and the ceiling fan.  He has started fixating on us when we talk to him and sometimes watches Jackson too.  I swear he’s now smiling at me but social smiles aren’t supposed to start until about 6 weeks.

Moments I cherish the most:  When Daddy plays guitar and sings to him.  Bath time – specifically wrapping him up in that hooded towel and snuggling him close!  Watching him sleep.  Putting him in the baby wrap and having him snuggled against me.  Sleeping with him in the recliner when he’s fussy – even though it’s frustrating when he’s up in the middle of the night, snuggling with him and soothing him back to sleep is so peaceful! 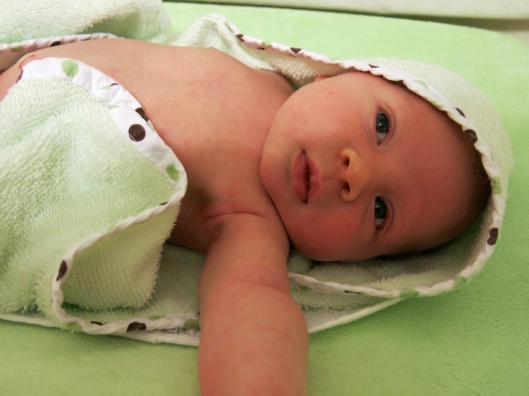 Things we can’t live without:
1)  The Miracle Blanket – swaddling is magic for my child.  This is the only swaddling blanket he can’t bust out of.  With others he gets his hands free and hits himself in the face and wakes himself up.  He sleeps so soundly when swaddled in this thing.  And during the day when he needs to nap and is fussy but can’t get himself to sleep…I put him in the swaddle and before I even get him fully wrapped, he is asleep.

2)  Aden and Anais Burpy Bibs – these are seriously the most absorbent burp cloths that exist.  They are soft and contoured and stay in place.  The best part is that they have snaps to snap around the neck and double as a bib!  I love them.

3)  The good old common household washcloth.   I’m talking about the pack of 18 cheapy washcloths for like 4 bucks at Walmart (Mainstays brand).  They aren’t super soft at first but that’s not the point.  This is the perfect solution for the spraying wee wee.  Those teepee things don’t work.  We keep a stack of these in the drawer of the changing table.  I sit one on his wee wee while I’m changing him and if he sprays, the washcloth soaks it up and it doesn’t run all over everything.  He’s SO squirmy that those teepee things don’t stay put on him.  These also come in handy during bath time.  We use the soft little baby washcloths to bathe him but these are great to drape over him to keep him warm.

4)  Gripe Water – okay so my child gets the hiccups at least 2 times a day.  He hates them.  He can’t rest when he has them and they will persist forever!  So…I don’t know what the magic is behind this stuff but it makes hiccups stop INSTANTLY.  Seriously not kidding.  It’s kinda thick so we mix it with about 10ml of water and put it in a little medicine cup with a nipple (putting it in a bottle would work too).  You can give it in a dropper that comes with it, but I find that he takes it easier if it’s mixed with water and he can drink from a nipple.  It’s amazing! 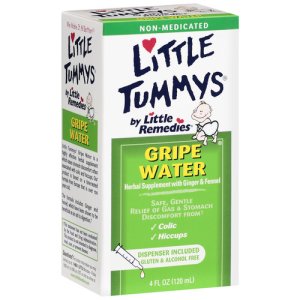 6)  Baby Shusher App – this thing is free.  If you have a new baby go download it now.  Not only does it save your throat from needing to constantly shush your baby, but you can record your own shushing to play back.  AND it has a feature where it will stop and listen to the baby’s crying/fussiness and adjust the volume of shushing accordingly.  Did I mention it’s a free app??!!??  I turn it on and sit it on the edge of the recliner while I’m rocking him at night and he drifts off much fast with it going! 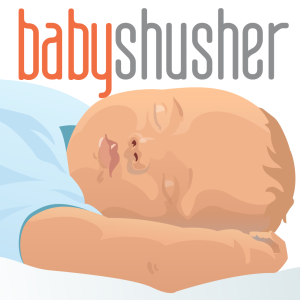 7)  Wubbanub – this was the greatest invention ever.  At first you think it’s just a cutesy little animal attached to a pacifier but it’s so much more than that.  It weighs the pacie down so that it stays in his mouth.  Also, it’s something for him to hold on to which, again, helps the pacie stay in his mouth.  We don’t use just plain pacifiers – they won’t stay in at this point.  The Wubbanub is the best. And how cute is he holding onto this thing for real!?! 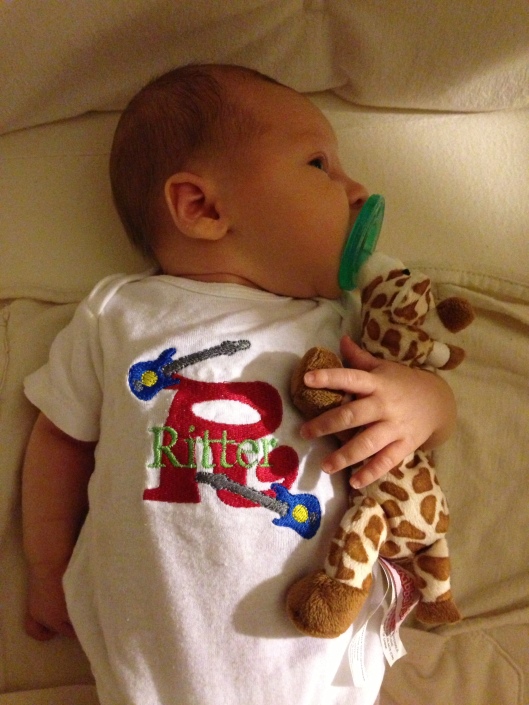 For that stats:  I decided to do monthly pics for his first year like I did my belly pics through my pregnancy!  Here’s our first one…and a few of the cute outtakes while we were trying to get a good one!  I decided to put him in his “Birth: Nailed It” onesie because… we totally did! 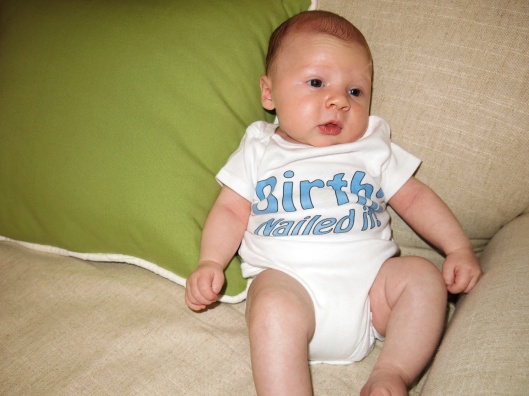 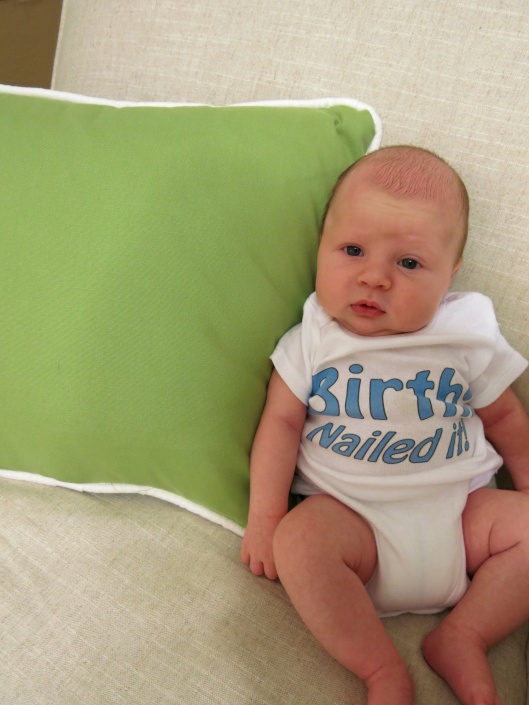